So, in the last post, I wrote about why people with large “strong” hearts can just drop dead in the presence of mulitple stressors.  What happens when you add all these up and add trauma, and at what point does it become a homicide?  As I noted in Part 1, there’s often no “right” answer about when to call something a homicide in cases of combined trauma and vulnerability.  For some people, like me, it’s any time it’s more than normal daily wear and tear.  For other people, it’s when the trauma is something more and is somehow “significant” by some measure.  Here’s a graph I show when I lecture on this subject: 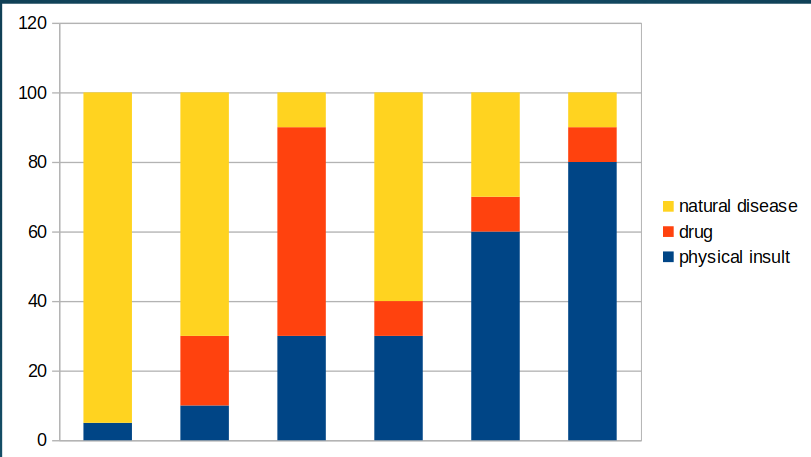 In this graph, I have six hypothetical deaths.  In each one there is a combination of natural disease, drug intoxication, and physical insult (trauma, etc) intentionally applied by another person.  Which one of these would I classify as “Homicide?” My answer is all of them, because in all of them the physical insult contributed to the death — unless in the first bar the “insult” was a daily wear and tear kind of act. But even then, the circumstances can make a case unique.  A classic example is the robber who enters a convenience store, pulls a gun, points it at the clerk and says “Give me your money or I’ll kill you!”  The clerk, and old man with bad heart disease clutches his chest and dies of sudden arrhythmic cause of death.  Cause of death?  “Hypertensive and atherosclerotic heart disease,” with the contributing factor of “Sudden emotional stress.”  Manner of death?  “Homicide.”  For a nice discussion, see references 1 and 2 at the end.

But other people would disagree.  Others would say that it’s a homicide only if the trauma exceeds some minimal threshold.  The thing to remember is that manner determination is inherently subjective.  While most cases are unambiguous, there’s wide variation about those ambiguous cases at the edges (3,4).  If you look at those references, particularly reference 3, you will see that there is great heterogeneity in how forensic pathologists approach these “on the fence” cases.

This variability is most obvious in weighing how convincing circumstantial evidence has to be when calling a case a “Suicide.”  I recently had a case of a woman who died of a drug overdose.  By her bed was a notebook listing the things wrong with her life as well as a checklist about the causes and evidence of suicide (e.g. “feelings of despair,” “chronic pain”, etc.).  On the basis of this and the drug levels, I was inclined to classify the case “Suicide.”  The family objected, so I brought the case to peer review in my office.   Some of my peers agreed it was likely a suicide.  Others discounted the notebook as not being a “real” suicide note, and thought it was an accidental death.  Others thought it was so ambiguous that it should be called “Undetermined.”  I amended the death certificate to reclassify the death as “Undetermined.”

There are ambiguous cases on the edges of all manner classifications, because they are social and cultural categories.  One obvious example is the edge between “Accident” and “Homicide” involving reckless behavior.  Some people call accidents involving drunk drivers “Homicide” because they consider drinking and driving to be so reckless that it crosses the line into “Homicide.”  Most people don’t, and classify these as “Accident.”  These are cultural, not “scientific” issues at that point.

With respect to cause, the line is a little more clearly drawn using the rule of normal daily activity, but there is still some ambiguity there as well. In which one of the cases in my illustration would I call the physical insult the “cause” of death?  Only the last two. 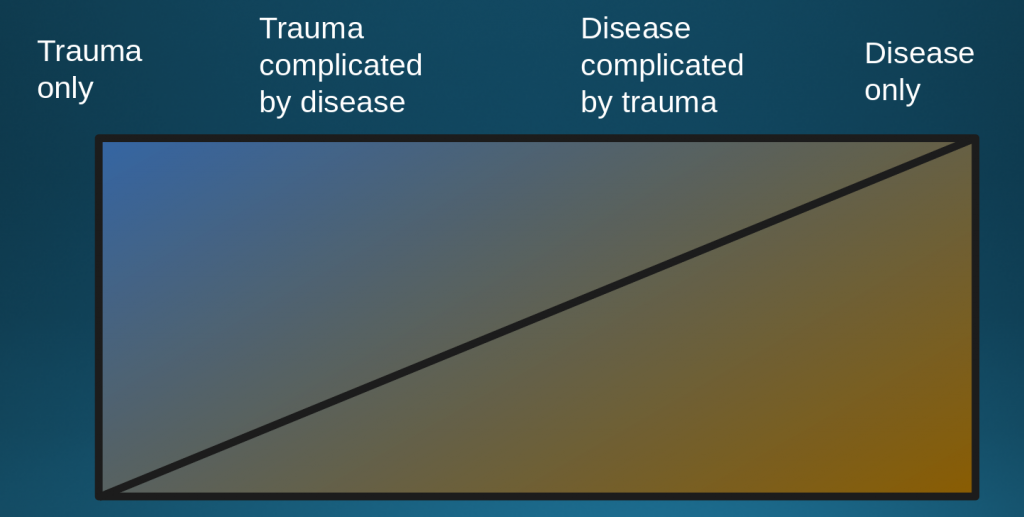 Thus, to me, the claim that vulnerability plays no role in determining cause of death is simply wrong.  However, some people take the position that if there’s any trauma then the cause is trauma.  Others take the position that natural disease is most important and can trump things like drug intoxication.  I believe the truth is in the middle:

Obviously, in order to assess the vulnerabilities, it helps to know the complete medical history, health habits, etc.  To understand the stressors, it’s important to know exactly what happened.  There is a movement out now to limit what forensic pathologists are allowed to know about a case under the facile label of avoiding “contextual bias.”  This would be disastrous and result in immeasurably bad diagnoses and manner determinations, but that’s for a different topic.

In any case, that’s my view regarding the relationship between vulnerability and stress in classifying cause and manner of death.  In a later post, I’ll address some of the claims about George Floyd in particular.

But with this background, let’s look at George Floyd’s autopsy itself.  Finally.  In the next post.