Now, let’s look at each of these issue in the autopsy report separately.  In this post, I’ll deal with the blunt trauma and the heart disease.

The first thing that Dr. Baker noted was some blunt trauma.  Trauma was noted twice in the first two pages of the report, and I won’t belabor it by talking about it twice.  There was trauma consistent with the altercation — abrasions and contusions on the face, etc.  Of import, in the second section of the report that deals with trauma, Dr. Baker notes that he performed a “subcutaneous dissection” and found no additional significant injury.  For those who don’t know, a “subcutaneous dissection” is when we strip the skin from the body to look at the subcutaneous fat and surface of the muscles.  It’s a tedious process, and a lot of times families object, because we are literally taking the skin off which can complicate making the decedent presentable for funeral (depending on the skill of the funeral home).  It’s important in cases of death in custody, however, because it is possible to cause deep bruises that are not obvious on the skin. This is particularly true in dark-skinned people, since faint bruises can be difficult to see.  So, it’s important to note that Dr. Baker did this, and nothing was found.

That doesn’t mean that the trauma findings are unimportant.  They are important because they indicate a struggle.  And a struggle means stress.

The next important issue was the decedent’s heart disease.  The decedent had both severe atherosclerotic coronary artery disease (“hardening of the arteries”) and hypertensive heart disease with enlargement of the heart and dilation of the ventricles.  There are a couple of things that came up at trial that are important here.

Generally, you get organ weights in a Medical Examiner office by sampling, say, the last 100 people who came in who died of trauma such as car accidents and such with the idea that it wasn’t their heart disease that killed them. The problem with that is that you don’t generally go back to each one of these cases and see if they have the diagnosis of hypertensive heart disease.  So, they might have an enlarged and dilated heart, but it doesn’t “count” because they didn’t die of it.  Over the past few decades, Americans have gotten fatter and more hypertensive.  As you might expect, studies of “normal” heart weight have shown an increase.  But it’s not because these people are all “healthy,” in my opinion.  It’s because more and more of them are obese and have low grade hypertension.

For instance, here’s one study from December 1941 that looked at 187 adult males in the US who died of non-cardiac causes(1):

Note that only 2% of the hearts were over 500 grams.  The average weight in this group was 356 grams.  Previous studies in the early 20th century ranged from 291 to 371 grams. Rosahn found that the primary determinate of heart weight was body weight, followed by age then height.  His formula for heart weight was Age+3(Body Weight in Kilograms)+ 100.

Think about this.  I’m 65 years old, obese and hypertensive.  I weigh 270 lbs, or 122.47 kg.  Thus, by this formula, my heart likely weighs 532.41 grams.  Is that healthy because it’s a “normal” weight?  No.  My heart, were it to weigh this much, would be enlarged and I would be at risk for sudden death because I’m obese and hypertensive and my heart shows it.  That would be true if I were to die in a car wreck before I have my arrhythmia.

As Americans have gotten bigger and more hypertensive, our hearts have gotten bigger.  There was a study out of Chicago that generated a new formula for calculating “normal” heart weights.  It’s pretty stunning.  The web site is here ( 2).  Go there and use the following data:

You will see that the “normal” weight for someone like that is right around 630 grams.  Seriously?   Because of this variability, some authors consider 500g to be a reasonable cutoff for diagnosing heart enlargement and leave it at that.  Basso et al wrote a very good review about it (3).

A reasonable question is whether or not all this heart size stuff really matters outside of the theoretical conduction system stuff.

One study found that “Cardiovascular mortality was 2.2 times higher among the 122 men with heart size ≥ 500 ml. m−2 than among those with heart size < 500 ml .m−2.” Though the relationship did not apply to those whose hearts were large due to conditioning(4).

Another study of elderly folk found (5) “Of the 359 subjects without cardiomegaly at baseline, 108 (30%) showed evidence of new cardiomegaly, and their risk of cardiovascular disease was 1.8 times that of subjects whose test results were negative for cardiomegaly throughout the study (p = 0.003). Thus cardiomegaly, as defined by an increased cardiothoracic ratio on x-ray films, irrespective of cause, is associated with a poor prognosis in very elderly men and women.”

This is supported by yet another study that found that cardiomegaly was an independent risk factor for sudden death, and is often associated with atherosclerotic coronary artery disease — a double whammy(6).  The authors note “Among adults with a mean age of about 50 years, cardiomegaly is a frequent cause of sudden cardiac death, and is highly associated with obesity. Cardiomegaly is also frequent in SCD with severe CAD.”

In this case, the decedent’s heart weight was 540 grams.  That counts.  To claim, as some have, that an enlarged heart means that it is big and strong is pretty misleading.  In addition, there was biventricular dilation.  Ventricular dilation occurs as the heart begins to get to the point where it cannot keep getting “bigger” and “stronger” and begins to fail.  It’s not completely specific for this, but it’s pretty good evidence.   Thus, this decedent had an enlarged heart with evidence that it was in the very early stages of failure.   So much for a “big strong heart.”  There’s another reason for a large dilated heart (dilated cardiomyopathy) in addition to “just” hypertension.  I’ll return to this in a later post.

Now let’s move on to the atherosclerotic heart disease.

Atherosclerotic coronary artery disease survival is directly related to the degree of stenosis over time and the number of vessels that are affected.  For instance, one older study found that 66% of patients with left anterior descending coronary artery stenosis between 50 and 70% survived for three years, while only 41% if those with stenosis of greater than 70% survived.  Worse, even smaller levels of disease have their effects.  In one study of nonobstructive small lesions, the risk of death was dose-related to the degree of stenosis(8).  The authors concluded “In conclusion, this study demonstrates that the presence of noncalcified and mixed coronary plaques provided incremental value in predicting all-cause mortality in symptomatic subjects with nonobstructive CAD independent of age, gender, and conventional risk factors.”

People who have disease in all three major vessels do much worse than those with disease in just one vessel.  Here’s a survival plot from an older study of people who did not undergo bypass procedures(9): 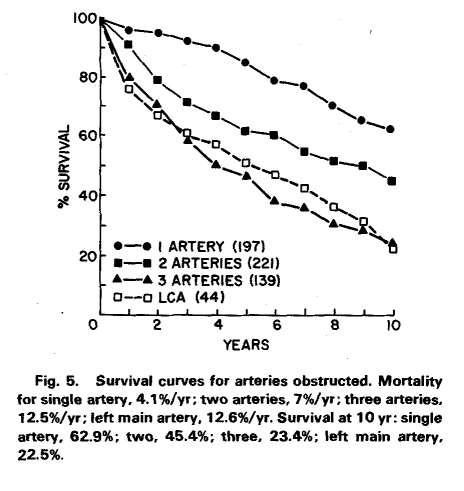 People with enlarged hearts do worse: 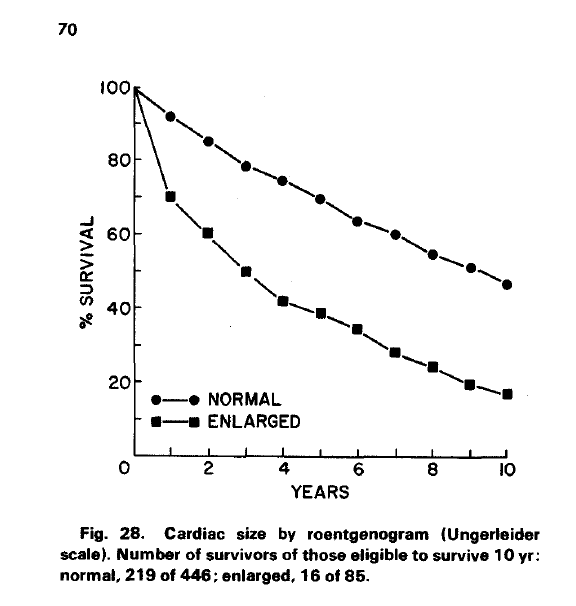 The next question to ask is whether or not this kind of sudden death can be brought on by stress.  As you might expect from previous sections, of course it can.  One early study found that sudden death was much more likely during physical exercise in both sedentery and athletic men(10).  The authors note ” Among men with low levels of habitual activity, the relative risk of cardiac arrest during exercise compared with that at other times was 56 (95 per cent confidence limits, 23 to 131). The risk during exercise among men at the highest level of habitual activity was also elevated, but only by a factor of 5 (95 per cent confidence limits, 2 to 14). ”

Depression also increases the risk of cardiac death(14): “Depressive symptoms increase the risk of mortality in CHD patients. The risk of depressed patients dying in the 2 years after the initial assessment is two times higher than that of nondepressed patients (OR, 2.24; 1.37–3.60). This negative prognostic effect also remains in the long-term (OR, 1.78; 1.12–2.83) and after adjustment for other risk factors (HR [adj], 1.76; 1.27–2.43). ”  As an aside, interestingly, it also increases the risk of *getting* coronary artery disease.

It should be pointed out that these are cardiac deaths but they are not all deaths due to the classical problem of a blood clot or hemorrhage into an arterial plaque completely occluding an artery.   Arrhythmic deaths can occur when the blood flow is not stopped completely, but instead when the demand for oxygen is greater than can be delivered — due to exercise, stress, autonomic dysfunction, etc.  Heart cells that are not completely starved of oxygen but are still not getting enough to function at full capacity are more likely to respond inadequately to stress by throwing an irregular beat.

It’s also of note that the combination of hypertension and coronary artery disease has an especially poor prognosis.  In one study, the authors found that, when looking at left anterior descending coronary artery disease(15), “Among patients who died in the 1st year after diagnosis, evidence of left ventricular hypertrophy or conduction delay in the electrocardiogram and multiple vessel involvement indicated poor prognosis.”

The claim that in this case it is somehow unethical, racist, and “character assassination” to recognize that these conditions might contribute to sudden death in a stressful situation during subdual by police is mind-boggling to me.

But let us move on to the next issues.  In the  next post, I’ll discuss the Covid and Sickle Cell Trait in passing, since neither are all that important.