A number of external factors were involved in the death of Mr. Floyd.  The most general and simple is the act of restraint in the absence of any aggravating effect.   In animals, there is a huge literature describing the effects of so-called “restraint stress.”  It turns out that restraining animals, particularly mice, by placing them in bindings or a small cage results in a large number of changes in the body.  It was first studied in relationship to the development of gastric ulcers, but it turns out that restraint causes changes in almost every organ system.   The extension to humans and human stress is not direct, but the activation of the sympathetic system and the “flight or fight” system is real.  As discussed by Laposada:

…The individual perception also influences being able to shut off the response when the threat has passed. For example, most people initially react to the challenge of public speaking by activation of the HPA axis, causing increased heart rate, blood pressure, and cortisol levels. After repeated public speaking, however, most people become habituated, no longer perceiving the event as stressful, and their cortisol secretion no longer increases with the challenge. However, approximately 10% of those subjects studied continue to perceive public speaking as stressful, and their cortisol levels increased each time they spoke in public. The innate factors that account for these differences are unknown.

The relationship between the perception of an event as stressful and sudden cardiac death is clearly recognized in the cardiology literature. Acute mental stress has been shown to lead to acute sinus tachycardia, hypertension, and a high degree of cardiac electrical instability. In patients with acute coronary syndromes, Reich et al. noted that anger was a trigger for up to 15% of life threatening dysrhythmias. Varieur and Mittlemen “attribute the lethal effects of anger in some circumstances to its activation of high-gain central neural circuitry in the sympathetic nervous system leading to myocardial electrical instability,” that is, the acute stress response.

It is difficult to assess the impact of an external event on an individual. Theoretically, one can predict what the consequences of an event are likely to be in a large number of individuals, but we remain unsure about how to predict the effects on any one individual in particular. Because the same environmental events produce different responses in different individuals and, indeed different responses at different times in the same individual, the distinguishing feature of stress becomes the behavioral response rather than the situation in which it occurs. Furthermore, anticipation of the event, so-called anticipatory stress, can start the preparation for secretion of mediators like CRH, cortisol, and epinephrine prior to the actual stressful event taking place. Thus, predicting who will perceive a restraint procedure in a way that triggers the acute stress response with the risk for sudden unexpected death is not clear.

Epinephrine is a key effector of physiological changes caused by the neuroendocrine stress cascade. However, in addition to its positive adaptive effects, epinephrine can produce fatal cardiac, pulmonary, and metabolic side effects (Table 2). Epinephrine can induce fatal cardiac dysrhythmias that are unpredictable in their occurrence. In addition to the acute stress response, epinephrine levels are also increased by exercise and hypoxia . Thus, the combination of struggle (i.e., exercise and increased oxygen demands), and the acute stress response that occur during police restraint procedures can increase epinephrine levels even higher and potentially enhance its toxic effects. Epinephrine-induced increases in arterial blood pressure can also trigger baroreceptors located in the carotid body that relay impulses to the medullary vagal center. Increased vagal tone causes bradycardia that may progress to asystole. In addition to the lethal dysrhythmias, high levels of epinephrine may produce pulmonary edema and impair oxygenation. Experimentally, epinephrine administration is used to produce a reproducible model of pulmonary edema.

In animal models, restraint stress is done often by putting mice in tubes that inhibit movement of the extremities.  Of primary importance, it does not inhibit breathing — and the animals are sometimes left in that position for hours at a time.  Weedn et al, in their recent article positing a mechanism for death due to prone position claim that prone position inhibits breathing enough to prevent compensatory respiratory response to metabolic acidosis.  Among other things, they invoke these animal experiments and load the deaths onto breathing restriction (2).  They state:

A relevant animal model of ventilatory restriction without pressure on the thorax is provided by Pudiak and Bozarth …  They restrained rats in cylinders which allowed some movement, but generally not the ability to turn around. Thus, the rats could breathe, but the confinement restricted chest expansion preventing deep breaths. When fed cocaine (increasing metabolic demand), 50% of the confined rats died compared to only 8% which were not confined.

This is directly contradicted by the article they reference.  Pudiak and Bozarth write(3):

Laboratory rats injected daily with a moderate dose of cocaine hydrochloride (30 mg/kg, i.p.) showed increased fatalities when cocaine injections were followed by 30 rain of restraint stress. The 5-day mortalityrate was 58% for the cocaine-plus-stress group, while 17% of the animals receiving cocaine without restraint stress died. This finding suggests that stress can augment the toxic effect of cocaine and that minimizing stress may be an important consideration in the clinical management of
cocaine overdose.

All fatalities occurred within 30 min of the cocaine injection. Also noted were convulsive seizures and position reversals during this time. This latter measure indicated that confinement in the restraint cylinder did not prohibit all movement of the subject as demonstrated by the rat reversing its position in the cylinder during testing. This is considerably less restrictive than procedures that totally prevent the animal’s movement during restraint and might better be described as confinement stress.

In a second *more restrictive* test, the rats were wrapped tightly, but the authors note:

To further investigate the role of stress in the cocaine-induced fatalities, an additional group (n=5) was tested using a more confining experimentalprocedure (data not shown). This group of subjects was injected with cocaine hydrochloride (30 mg/kg/day, i.p.) and wrapped in porous plastic (WeedBlock ® landscape fabric, Easy Gardener, ® Waco, TX) for 30 min following injections. The animals were wrapped tightly enough to prevent position reversals, but ample space was provided for normal respiration. The 5-day fatality rate for this group was 100%. (emphasis mine)

Thus, even in the more restrictive second test, there were no restrictions on breathing. In the first, larger test with less restraint, it is clear that the restrictions on breathing claimed by Weedn et al were not present.  These are stress deaths under the influence of catecholamine stress, pure and simple.  It has nothing to do with restriction of breathing.   It was explicitly noted that the animals could breathe freely, and could even turn around in the tube. In that article, there was no mention of, or measurement of, metabolic acidosis.

In these animal models, restraint has massive effects on numerous organ systems.  It is not modulated by metabolic acidosis, but by its effect on the nervous system.  As one author notes(4):

Restraint stress is a method used to induce physiological responses in an animal by restricting its free movement. An attractive feature of restraint stress is that it is primarily a psychological stressor, i.e., the physical discomfort induced by restraint is intentionally secondary to the cognitive appraisal of the organism’s inability to gain free movement. The popularity of this stressor technique is attributable to its relatively low cost and technical requirements. Restraint stress is also amenable to parametric manipulation, such as duration of restraint, number of restraint sessions, time between restraint sessions, and food intake or deprivation prior to restraint. Moreover, different methodologies have been tailored to meet the needs of researchers from varied disciplines such as neuroscience, endocrinology, physiology, pharmacology, psychology, and gastroenterology. (emphasis mine)

In fact, animals placed under such stress can become used to it(5):

During the first exposure to immobilization stress, laboratory rats or mice typically struggle vigorously to free themselves for 20–30 min. After that time, they will often cease struggling and remain motionless until a disturbance occurs. When one animal begins to struggle or if there is a sudden loud noise or some other form of sensory stimulation, many of
the animals in the group that is being immobilized will begin to struggle again. Animals that have been immobilized daily for many days display signs of habituation to the stressor and calm down much sooner than naı̈ve animals being immobilized for the first time.

Here’s a table of *some* of the stress-related changes that occur in the brain: 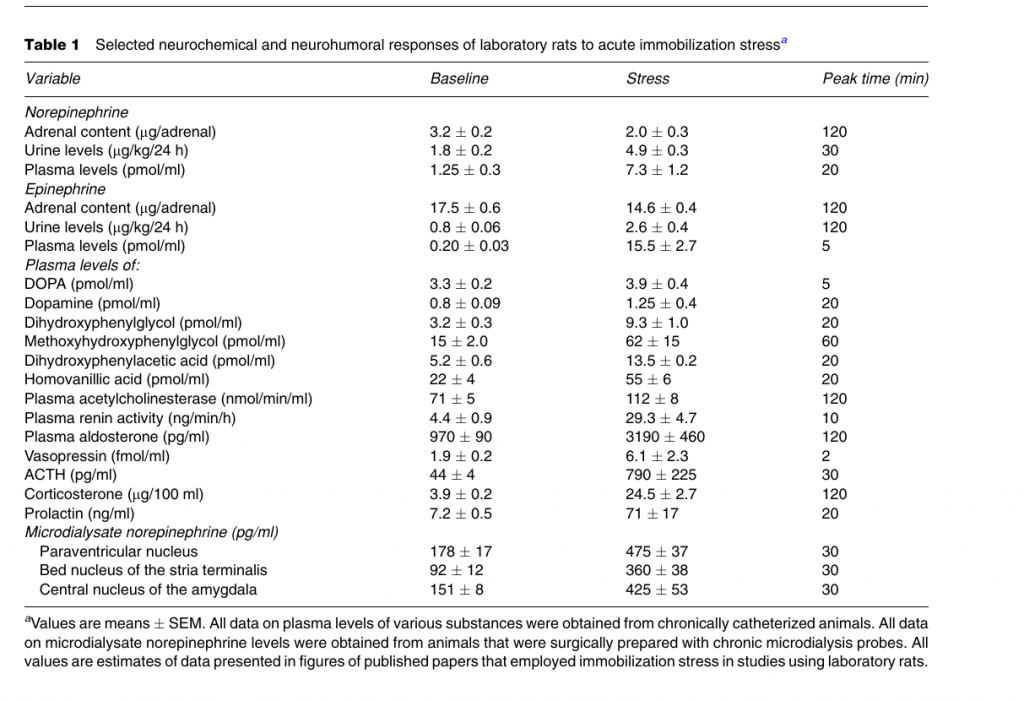 The effects of restraint stress in these animals models is far-reaching, resulting in gastric ulcers, tumor production and metastases, behavioral changes, changes in the immune system, and a host of others.  Loading the increased susceptibility to cocaine on respiratory effects is almost certainly incorrect.

Thus, in the context of catecholamine/hyperadrenergic stress, the very act of restraint, even in the absence of more controversial issue such as prone position and such, is a significant stressor.  This is why, I think, that prospective studies do not show increased mortality with prone position (which I’ll discuss later).  One of the things that I’ve noticed in watching bodycam videos of deaths in custody is that there’s a pattern I see a lot.  That is that the person being arrested and the police seem to be getting along fairly well — talking, joking, looking fairly relaxed, etc. — until the time comes when the police start putting on handcuffs and getting the subject into a car.  *That* is when the subject starts to fight and a reacts violently.  That is the point where restraint stress is kicking in, I think. That is the point where things turned bad for Mr. Floyd as well.

One can imagine the effect that this kind of stress would have in a person who is at risk of stress cardiomyopathy related to endogenous catecholamine production associated with a paraganglioma in the context of hypertensive and atherosclerotic coronary artery disease.

Next, prone position and asphyxia.