Now we come to a finding that I think was underappreciated.  Mr. Floyd had a small pelvic tumor that, on evaluation, was diagnosed as a benign paraganglioma.  Here’s the key.  While the tumor was benign, there’s a reasonable chance that it was a “functional” tumor.  Tumors, both benign and malignant, often retain some similarity to the tissues in which they arose.  A tumor of the bronchial epithelium may still look like bronchial epithelium — but it is disorganized and grows where it shouldn’t.

Tumors of organs that secrete hormones may still secrete those hormones or variations of them.  When they do, the patient may have an excess of the hormone which may become symptomatic.  Because the tumor contains damaged cells, the product may be somewhat different than the naturally produced hormone, and may have different effects.  When these effects are symptomatic, it’s called a “paraneoplastic syndrome.”

Paragangliomas are tumors of cells that, for the most part, produce “catecholamines” — stimulatory hormones such as adrenalin (though some, those of the head and neck can are so-called “parasympathetic” paragangliomas and secrete a different hormone).  When the tumor is found in the adrenal gland, it is called a “pheochromocytoma.”  When it is found in a different part of the body, it is called a “paraganglioma.”    Almost all paragangliomas outside of the head and neck actively secrete hormone.  There is an old mnemonic that says that about 10% of paragangliomas secrete enough hormone to be symptomatic, more resent studies suggest that it’s more than that.  With respect to pelvic paragangliomas (which is what Mr. Floyd had), it’s likely much more.  In one small study of 7 such tumors, 4 were associated with elevated catecholamine levels, 3 noted before surgery and one during surgery (1).  I saw no statements that the functional status of Mr. Floyd’s tumor had been evaluated.  When functional, these tumors can constantly produce large amounts of hormone, small amounts of hormone, or be “paroxysmal,” meaning that they secrete hormone in spurts leading to sudden attacks of symptoms.

The symptoms of a functional paraganglioma are well known.  Here’s a description from one review article(2):

Paragangliomas that hypersecrete catecholamines may cause signs and symptoms identical to those in patients with hyperfunctioning adrenal pheochromocytoma. Episodic symptoms may occur in spells, or paroxysms, that can be extremely variable in presentation but typically include forceful heartbeat, pallor, tremor, headache, and diaphoresis. The spell may start with a sensation of a “rush” in the chest and a sense of shortness of breath, followed by a “pounding” heartbeat in the chest that typically progresses to a throbbing headache. Peripheral vasoconstriction with a spell results in cool/cold hands and feet and facial pallor. Increased sense of body heat and sweating are common symptoms that occur toward the end of the spell. Spells may be either spontaneous or precipitated by postural change, anxiety, medications (e.g., metoclopramide, anesthetic agents), exercise, or maneuvers that increase intra-abdominal pressure (e.g., change in position, lifting, defecation, exercise, colonoscopy, pregnancy, trauma)

People with functional paragangliomas are more prone to panic attacks and stress cardiomyopathy, which I’ll discuss in a minute.

Self medication for the hyperadrenergic state:

So, what would you expect from someone who is living a life with a tumor that is, in essence, secreting home-grown methamphetamine?  You’d expect chronic high blood pressure, excitability, perhaps a bit of impulse control issues.  And, maybe, someone might self-medicate with opiates.   Interestingly, this was brought out by proponents of the defense who were trying to squash evidence of Mr. Floyd’s drug use.  One news report noted(4):

Floyd family attorneys Ben Crump and Antonio Romanucci released a statement after Ross’s testimony blasting the defense’s efforts bring Floyd’s drug use to the forefront of the case.

‘As the defense attempts to construct the narrative that George Floyd’s cause of death was the Fentanyl in his system, we want to remind the world who witnessed his death on video that George was walking, talking, laughing, and breathing just fine before Derek Chauvin held his knee to George’s neck, blocking his ability to breathe and extinguishing his life for all to see,’ the statement read.

‘Tens of thousands of Americans struggle with self-medication and opioid abuse and are treated with dignity, respect and support, not brutality. We fully expected the defense to put George’s character and struggles with addiction on trial because that is the go-to tactic when the facts are not on your side.

Now it may be that the functional status of Mr. Floyd’s tumor was assessed, but such results were not shared during discoveryo prior or during the trial as far as I know.  Since I believe that this paraganglioma might have been very important, I concur with the family’s description of the Mr Floyd’s use of drugs as “self-medication.”  It makes sense to me that he was self-medicating for the effects of his tumor.  I’ll write a bit more about this in the next installment.

But here’s what is important with respect to this case.  This excess catecholamine can result in sudden cardiac failure and death, particularly under stress.  In one study of 140 consecutive patients with paraganglioma/pheochromocytoma, 11% suffered acute catecholamine cardiomyopathy (ACC).  The authors write(5):

ACC presented as abrupt cardiorespiratory failure in all 15 subjects. Twelve patients suffered acute pulmonary oedema, associated with chest pain in five cases. In 10 of these 12 patients, ACC progressed to cardiogenic shock requiring inotropic treatment and invasive ventilation, associated with intra-aortic balloon counter pulsation, extracorporeal membrane oxygenation or continuous veno-venous haemofiltration in three patients. The three patients without pulmonary oedema presented at the emergency room with sustained oppressive chest pain with stable haemodynamics (two) or heart failure (one). Twelve patients had high BP (170 (163–220)/110 (108–110) mm Hg) and 10 had a high heart rate (140 (129–149) beats/min (bpm)). Three patients were normotensive (BP 120 (118–127)/ 69 (69–73) mm Hg), including two with tachycardia (heart rate 132 and 140 bpm). Seven patients presented with sinus tachycardia, one with paroxysmal supraventricular tachycardia, and one with atrial flutter. Severe ventricular arrhythmias occurred in three patients, two with non-sustained episodes of ventricular tachycardia and one with ventricular tachycardia that evolved to ventricular flutter; this last patient and another patient who developed asystole had been successfully resuscitated after cardiac arrest.

So, stress can trigger this. And, in fact, this is sometimes called “stress cardiomyopathy.”

Similary Gagon et al note (6)” Acute TLC may be found in up to 3% of patients with secreting PPGL.” Where “TCL stands for “Takotsubo-like catecholamine cardiomyopathy” and “PPGL” stands for “Pheochromocytoma and paraganglioma).

Whatever you call it, the common pathway is the combination of stress and catecholamines.  As one article notes(8): “Whatever the trigger, the common denominator in TTC is catecholaminergic stress. Classically suggested after emotional trauma, TTC may also be induced by surgical stress or endogenous or iatrogenic ␤2-mimetic intoxication.”

For the purpose of this discussion, I’m going to be a lumper, because both can be induced by stress.  For for the general use of the term, it turns out that people with cancer are more likely to suffer stress-related cardiomyopathy, and people with stress-related cardiomyopathy are more likely to have tumors (though not necessarily paraganglioma)(9).

Can other things than physical and emotional stress do it?  Why yes, yes they can.  As you might expect, if a person is producing too much catecholamine, then taking such drugs might make it much much worse.  And in fact, that’s the case.  If you give a person with a paraganglioma a drug like that you can induce stress-cardiomyopathy-like heart failure.  That includes amphetamines, serotonin re-uptake inhibitors, and others.  Including methamphetamine(10).  Mr. Floyd was both self-medicating and exacerbating his chance of stress cardiomyopathy by the combination of drugs in his system. 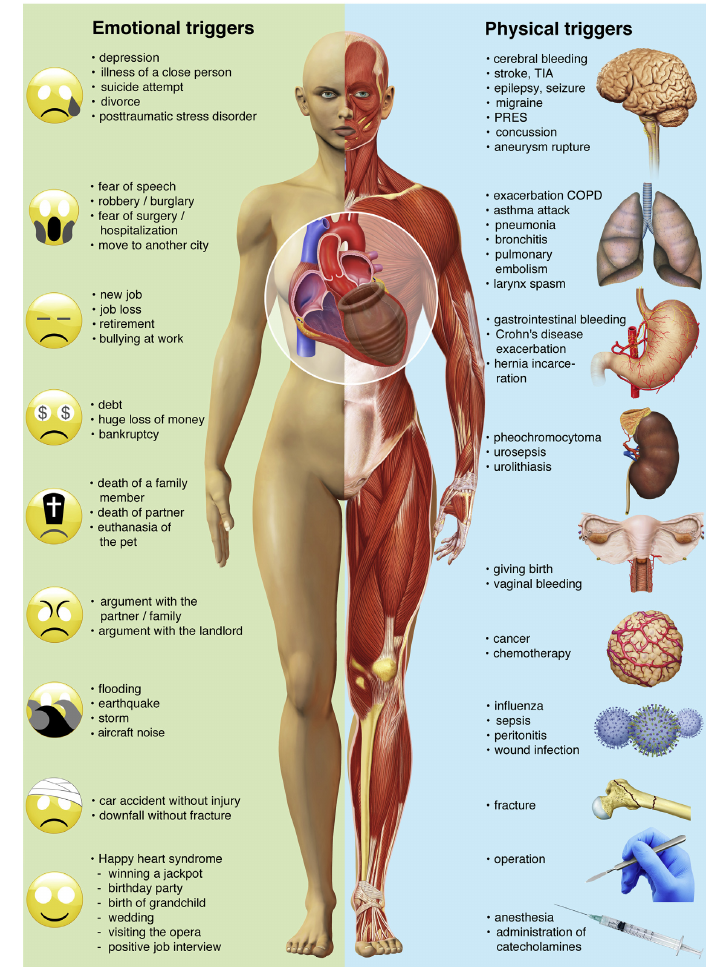 This is mediated through the hormonal and autonomic nervous systems.  Here’s another great graphic from the JACC folk (12): 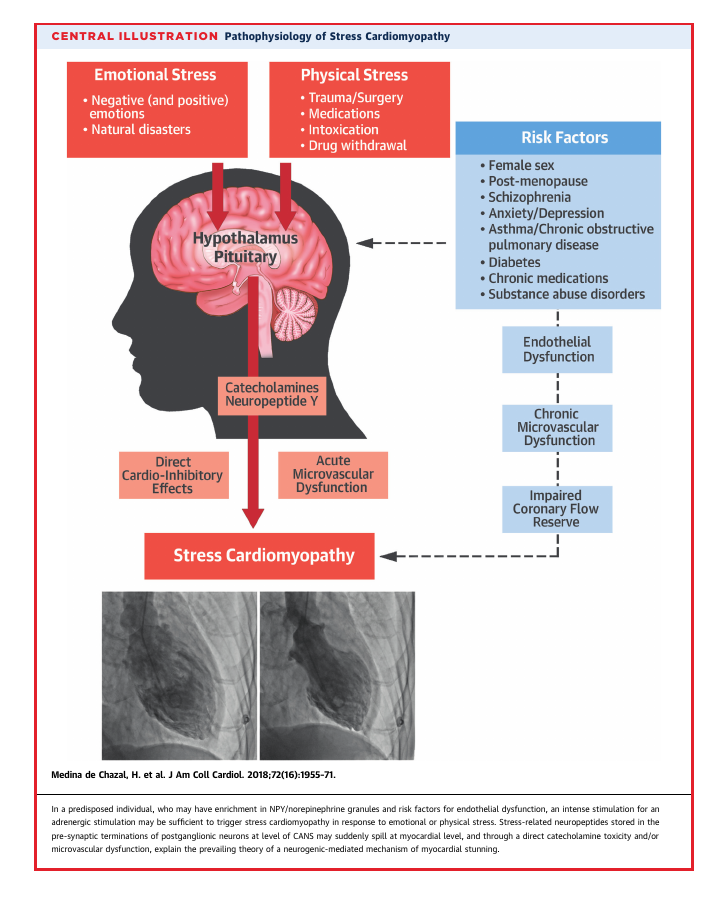 Now, traditionally, Takotsubo cardiomyopathy is considered reversible and rarely, if ever fatal.  But more recently that’s changed.  One study found that people who suffered stress cardiomyopathy had a higher 1-year mortality than matched patients who had suffered myocardial infarction (Hazard ratio 1.58).  The authors note ( where “Killip class” is a 0-4 classification to predict outcome in a heart attack, and LV is left ventricle)(13):

These three dichotomous traits were used to calculate a risk score by allocating one point for the presence of each factor. Mortality rates in patients exhibiting risk scores from 0 to 3 points were 13.7%, 37.3%, 64.7%, and 100%, respectively.

It should be noted that the cause of death in these cases was not noted.

In one large study, the mortality of people with stress cardiomyopathy was essentially the same as that with more conventional ischemic heart attacks acutely.  The authors of that study found (where STEMI stands for “ST elevation myocardial infarction”, and NSTEMI is “non-ST elevatopm myocardial infarction”)(14):

“Patients with takotsubo syndrome have short- and long-term mortality rates similar to those of patients with acute myocardial infarction and often have concomitant advanced coronary artery disease.”

Similarly, Pellicia et al write(15): The prognosis was initially thought to be benign, but subsequent studies have demonstrated that both short-term mortality and long-term mortality are higher than previously recognized. Indeed, mortality reported during the acute phase in hospitalized patients is ≈4% to 5%, a figure comparable to that of ST-segment–elevation myocardial infarction in the era of primary percutaneous coronary interventions.

There are a few racial differences that studies have discovered with respect to stress cardiomyopathy.  Compared to Caucausians,  African-Americans have about the same mortality.  However, there is some evidence that African-Americans, or at least African-American women,  are more likely to have shortness of breath as a primary symptom.

The Patel article is reference 18.

I want to emphasize here that while paragangliomas increase the risk of stress cardiomyopathy, they are not necessary. It has been hypothesized that catecholamine-induced cardiomyopathy may be present in the context of restraint even in people without this tumor(19).  Chronic hypertension, as present in Mr. Floyd, increases the risk of stress cardiomyopathy, in part because it’s a symptom of pheochromocytoma/paraganglioma.  Hypertension is also associated with a worse outcome, primarily due to stroke (20).  So, if Mr. Floyd’s paraganglioma was not functional, it doesn’t change the general pathway of his death.  If his paraganglioma *was* functional, it’s important icing in the cake.

I’ll go into this in more detail when I put it all together in this case, but if you recognize Mr. Floyd’s reaction to being put into the police car as the beginning of a panic-type attack and an incipient stress reaction, then the remainder of the event is pretty much a textbook case of the clinical relationship between stress, vulnerable heart, intoxication in a person with high endogenous catecholamines.

In the next installment, I’ll discuss the drugs Mr. Floyd had taken.